AutoUpgrade enables customers to upgrade one or many Oracle databases at the command-line with a single command and a single configuration file. AutoUpgrade will run the preupgrade tasks, perform automated fixups where needed, execute the database upgrade, and finish by taking care of post-upgrade tasks. It includes automatic retry and fallback, the possibility to schedule upgrades for future points in time, and the ability to set, change or remove initialization parameters as desired.

END_OF_DOCUMENT_TOKEN_TO_BE_REPLACED

This post covers Overview & Components of Oracle GoldenGate (software for real-time data integration and replication in heterogeneous IT Systems). I also added several examples for a full Setup.

END_OF_DOCUMENT_TOKEN_TO_BE_REPLACED

Let’s begin by reviewing the structure of a Real Applications Cluster. Physically, a RAC consists of several nodes (servers), connected to each other by a private interconnect. The database files are kept on a shared storage subsystem, where they’re accessible to all nodes. And each node has a public network connection.

In terms of software and configuration, the RAC has three basic components: cluster software and/or Cluster Ready Services, database software, and a method of managing the shared storage subsystem.

END_OF_DOCUMENT_TOKEN_TO_BE_REPLACED

Here we are going to convert a NON-CDB to PDB.

The process is simple , from the 12c Oracle Home start DBCA and create a CDB Instance with one PDB. Then you have all the necessary setup for the migration. Now with few simple steps one can migrate to the CDB instance.

In this demo my Non-CDB name is DIEGO and the newly created CDB instance name is GLOBALDB, it has one PDB named PDB001 and will later add DIEGO into the CDB as a PDB. 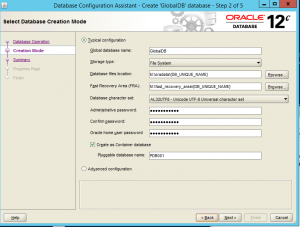 What is Clustering?
Clustering is the grouping of individual computers in such a way that they can act as a single computer system. These combined resources can then be presented to applications as a single system.  One benefit of a cluster is that the application does not need to be cluster “aware”, and requires no special coding to take advantage of most cluster related services.

Oracle clustering is a shared everything architecture that involves sharing of storage by the systems of the cluster.

Oracle RAC:
Oracle RAC stands for Real Application Cluster. It was introduced by Oracle with 9i release.
Oracle RAC is a cluster database with a shared cache architecture that overcomes the limitations of traditional shared-nothing and shared-disk approaches to provide highly scalable and available database solutions for all your business applications. Oracle RAC is a key component of Oracle’s private cloud architecture.

Single Instance Vs RAC Instance
As can be seen from the below diagram Oracle RAC database has more than one instance, whereas the database is single and shared across all the instances. Thus focus of RAC is on share everything concept. This ensures availability of Oracle database and also the scalability. Each RAC instance is installed on different machine (called nodes) thus scaling the computing power and maximizing availability.

Below is the architecture diagram which shows the implementation of Oracle RAC instance in real life scenario. What it additionally shows is the interconnect (hb) i.e high speed communication between the RAC instances to ensure ACID (Atomicity, Consistency, Independent and Durability).

I have tried to highlight the commands which are used for different instances. As the system has grown with different components, so have the commands to manage and monitor them. Below table shows the list of commands, their usage, where used (RAC/ASM) and home directory where the command is located.

In order to start a DG database automatically you can use DGMGRL. You must have parameter dg_broker_start=true,
You can set it to true using:
SQL> ALTER SYSTEM SET DG_BROKER_START=TRUE SCOPE=BOTH;

When database is started from DGMGRL, it starts the database in mode according to database_role.

Steps for Windows:
1- Set ORA_SID_AUTOSTART to false in windows registry.

++ Use either of 2 (start1.bat or start2.bat), only difference in these is OS and database authentication.

END_OF_DOCUMENT_TOKEN_TO_BE_REPLACED

Oracle 12c datapump have following clauses, which we would discuss one by one:-

Example if you want a full database export except 1 schema (say TEST), then:-

Similarly suppose you want to exclude all indexes from a schema export and the condition is to export only indexes that starts with TEST_%, then:-

So using this clause you can exclude any specific content from the dump, try and explore this option more. To get a list of available objects that can be excluded query the OBJECT_PATH column of DATABASE_EXPORT_OBJECTS, SCHEMA_EXPORT_OBJECTS and TABLE_EXPORT_OBJECTS views.

INCLUDE – Exactly opposite to EXCLUDE clause, this is used when you explicitly want to export, say only some tables, indexes along with views, packages in a schema dump, so only the the object types explicitly mentioned in the include clause would be imported and nothing else.

So the above expdp command would only export tables EMP & DEPT, PROCEDURE and all indexes starting with TEST% no other objects of TEST schema would be exported.

QUERY – This clause allows you to filter the data that gets exported, think of it as EXCLUDE & INCLUDE clause but with more control over filtering, thus this is more like a WHERE clause of the expdp command.

When the QUERY parameter is specified for a table, Data Pump uses external tables to unload the target table.

Above command would export all tables of TEST schema but only specific records of EMP table.

CLUSTER – This is used in RAC env. and used to spread the worker process on other oracle instances to utilize RAC resources for datapump jobs. END_OF_DOCUMENT_TOKEN_TO_BE_REPLACED